Galatians 3:1-3, “O foolish Galatians, who hath bewitched you, that ye should not obey the truth, before whose eyes Jesus Christ hath been evidently set forth, crucified among you? This only would I learn of you, Received ye the Spirit by the works of the law, or by the hearing of faith? Are ye so foolish? having begun in the Spirit, are ye now made perfect by the flesh?”

I was saddened this evening as I found a sermon by Pastor James Knox of The Bible Baptist Church in Leland, Florida, titled: “Repent And Believe The Gospel: What Is Repentance?”

“Do you know why it's hard to know if people get saved or not anymore? It's because we've given them this option of salvation without repentance. You don't see a changed life, because no changed life was expected. No changed life was required. Look, you can stop drinking, stop cussing, stop chasing women, stop chasing men, stop chasing both—you can quit all that stuff and die and go to Hell—repentance is not the Gospel. But you're not going to come to God, without any sorry, any guilt, any acknowledgement, any desire, to do something about your sin. You're not going to get saved on those terms. Those are man's terms, not God's terms.” SOURCE: Pastor James Knox, “Repent And Believe The Gospel: What Is Repentance?” (58:22 time in YouTube sermon video)

Dear reader, James Knox is not saved! What a messed up theology he has! He has a wrong mindset toward the Gospel. How can a man be saved, who thinks you must desire to turn away from sinning as a prerequisite to faith? Pastor Knox plainly says that repentance is not the Gospel, nor are we saved by repentance; but then he foolishly says that if you haven't repented of your sin your faith is invalid. Kindly said, he is a confused pastor!!!

Nowhere in the Bible are we taught that God will not save a person unless they feel sorrow or regret for their sinning. James Knox is preaching a counterfeit Gospel which demands more than God requires. God just requires faith. What saith the Scripture? John 6:28-29, “Then said they unto him, What shall we do, that we might work the works of God? Jesus answered and said unto them, This is the work of God, that ye believe on him whom he hath sent.” What saith the Scripture? John 6:40, “And this is the will of him that sent me, that every one which seeth the Son, and believeth on him, may have everlasting life: and I will raise him up at the last day.”

We ought not expect changes from a person to be saved, nor as a means of proving that they are saved later on. We've got a bunch of corrupt self-righteous pastors today, running around attaching works to faith, one way or another. Listen, you CAN trust Christ and still go out and live like the Devil, and KNOW 100% that you're going to Heaven. That is because forgiveness of sins and eternal life are the free gift of God (Romans 6:23). We are saved by GOD'S RIGHTEOUSNESS, which is imputed (credited) to every believer by faith alone. Philippians 3:9, “And be found in him, not having mine own righteousness, which is of the law, but that which is through the faith of Christ, the righteousness which is of God by faith:” Boy, I love that!

“People don't mind you telling them they can go to Heaven in 30 seconds; what they mind is you telling them that their religion is wrong and will take them to Hell.” SOURCE: Pastor James Knox, “Repent And Believe The Gospel: What Is Repentance?” (58:22 time in YouTube sermon video)

Although there is some truth to what Pastor Knox just said (regarding forsaking one's faith in false religion to instead trust Christ), he also foolishly applies this to your sins. From listening to the entire sermon it is very clear to me that Pastor Knox is evasive, subtlety teaching his damnable heresy that:

“But you're not going to come to God, without any sorry, any guilt, any acknowledgement, any desire, to do something about your sin. You're not going to get saved on those terms. Those are man's terms, not God's terms.” SOURCE: Pastor James Knox, “Repent And Believe The Gospel: What Is Repentance?” (58:22 time in YouTube sermon video)

1st Peter 1:18-19, “And if ye call on the Father, who without respect of persons judgeth according to every man's work, pass the time of your sojourning here in fear: Forasmuch as ye know that ye were not redeemed with corruptible things, as silver and gold, from your vain conversation received by tradition from your fathers;”

James Knox attempts to justify his heresy by citing umpteen passages from the Bible about repentance. However, concerning redemption, he woefully embellishes the Biblical Greek meaning of “repent” (metanoia: “a change of mind”) to mean something VERY different! As do many false prophets today, Pastor Knox wrongly understands repentance to mean turning away from your sinning. He makes the fatal doctrinal error of making repentance a separate act from believing. In his sermon, Pastor Knox plainly teaches that repentance happens FIRST, and then faith follows SECOND. That is unbiblical. Repentance and faith are inseparable and happen AT THE SAME TIME.

The Bible does not require that you first repent, and then believe. Proof of what I say is in the Gospel of John, which does not mention the word "repent" even once. You read correct! The word "repent" is not mentioned even once in the Gospel of John. But we do find the word "believe" mentioned 88 times! Faith alone saves!!! James Knox is a false teacher, an infidel of the Christian faith. According to James Knox, someone who believes on Christ without repenting has experienced a false conversion. ...

At about 18 minutes into the sermon video, Pastor Knox likens salvation to diabetes. He says that saying you're sorry, while drinking 32 ounce Cokes every day won't cure your diabetes. He says exercising in the gym won't help your diabetes, if you're stopping off to eat a half dozen sugary doughnuts on the way home. Sadly, he applies this to salvation, teaching that “If they're not going to give up the things that are the reason they need Jesus, He can't help them. You've got to repent!” (19:56 time in video). This is a false gospel. Pastor Knox is sinfully teaching that you must forsake your sins, for which Christ died, or else God will not save you on those terms.

“Do you know why it's hard to know if people get saved or not anymore? It's because we've given them this option of salvation without repentance. You don't see a changed life, because no changed life was expected. No changed life was required.” SOURCE: Pastor James Knox, “Repent And Believe The Gospel: What Is Repentance?” (58:22 time in YouTube sermon video)

What a confused man! Pastor Knox accuses the free grace only crowd (true Christians like me and Pastor Ralph Yankee Arnold) of giving people an "option" to be saved WITHOUT REPENTANCE. Clearly, James Knox does not believe that faith alone is sufficient to go to Heaven. According to Pastor Knox's false teaching, you must also give up your sins to be saved. I hope you see the danger of what he is preaching.

If forsaking a sinful lifestyle were required to get to Heaven, then the Apostle John would have said so in the Gospel of John, but he didn't. John said that people who do evil won't come to the light of the truth to be saved, lest their deeds should be reproved (John 3:20). So if someone believes on Christ, they have repented (i.e., they have changed their mind from unbelief to belief). Who is John Knox to ADD an extra step to God's simple plan of salvation?

It is a counterfeit gospel to teach that a person must repent AND believe. No, the Bible says we repent TO believe. Repentance is never a separate act from believing! That is why the Gospel of John doesn't mention repentance at all. The man who believes has repented. He has changed his mind toward God (Acts 20:21), acknowledging the truth (2nd Timothy 2:25-26). Beware of Pastor James Knox and The Bible Baptist Church he heretically leads. 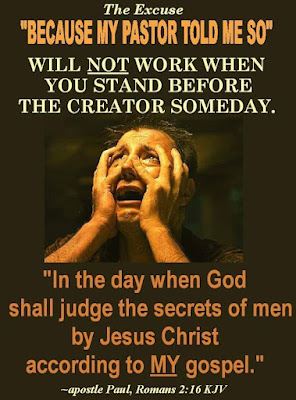 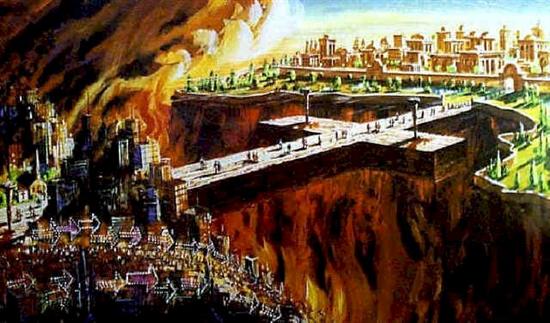